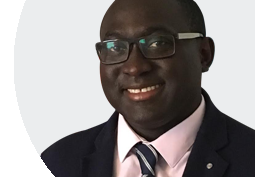 Mr. Lamin Daffeh is the Founder and CEO of the Fresh Start Foundation and the Executive Director of Heeno International. Mr. Daffeh has over 10 years’ experience in international non-governmental organisations, working in Africa and in the United Kingdom, supporting vulnerable children through access to uninterrupted education and welfare support. He has implemented numerous successful community development projects.

He is well known within the international development domain because of his work in supporting vulnerable children and communities. He appears on television, radio and high-level donor conferences on developing partnerships, policy advice, organisational development and assessment skills, human resource management and resource mobilisation. He was a nominee for bearing the Olympic torch in the UK in 2012, and in 2015 he became an honorable member of the British Foreign School Society.

Mr. Daffeh is also an experienced Social Reintegration Officer, having previously worked within the Criminal Justice System in the UK, supporting individuals with criminal records and long term unemployment barriers. He taught individuals new skills and facilitated their enrolment onto higher educational courses that enhanced their future employment opportunities, access to education and training prospects, with the aim of preventing their re-offending.

Mr. Daffeh has a passion for education, international development and legal research. He has worked extensively within education and poverty alleviation remits, providing strong leadership skills and strategic guidance in programme implementation. He implements self-reliant and sustainable projects that enhance livelihoods and advance further opportunities for children, young people and communities.
Following his Master of Laws (LL.M), with Commendation in International Human Rights Law from the Birmingham City University (BCU), he is now a Ph.D Candidate in International Law at BCU. His specializations are in the International Bill of Human Rights (with a particular interest in the United Nations Convention on the Rights of the Child), Public International Law, International Criminal Law and Cultural Relativism.

He has a Postgraduate Certificate in Research Practice from BCU; BSc in Crime and Criminology from the University of Portsmouth; an advanced Diploma in Criminology from Worcester College of Technology; and Levels 1-3 qualifications in UK Immigration, Nationality, EEA and Asylum Laws from the XY Training Group, London. He is an Associate Fellow of The Higher Education Academy of the UK.

Mr Daffeh is Jula’s representative in the United Kingdom and Resource Person on: social Integration; charitable organizations; immigration policies and the legal requirements of setting up companies in the UK;

Mr Daffeh is Jula’s representative in the United Kingdom and Resource Person on: social Integration; charitable organizations; immigration policies and the legal requirements of setting up companies in the UK; and social reintegration for traumatized and delinquent children from criminal justice systems and conflict zones.