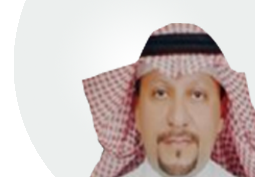 Dr. Ahmed Al-Jam’an Eissa Saleh was Governor of Qurayyat Al-Ulya Governorate from November 2011 to February 2014. Before his transfer to Qurayyat Al-Ulya, he had occupied several posts in Abqaiq Governorate (where nearly two-thirds of Saudi crude is processed before export), such as Manager of the Governor’s Office, Under Secretary, Chairman of Abqaiq Local Council and Acting Governor. His career also includes employment at the Saudi Arabia Oil Company and the Ministry of Telegraph, Mail and Telephone. Dr. Saleh’s works have appeared in Egyptian and Saudi publications and he is the recipient of many prizes and letters of appreciation in Saudi Arabia. He has a B.A. in Business Administration from Imam Mohamed Bin Saud Islamic University (1998), a Post-Graduate Diploma in Business Administration from Al-Jenan University in Lebanon (1999) and a Ph.D in Business Administrations from University of Ain Shams in Egypt (2009). He is a member of the Egyptian Management Association.